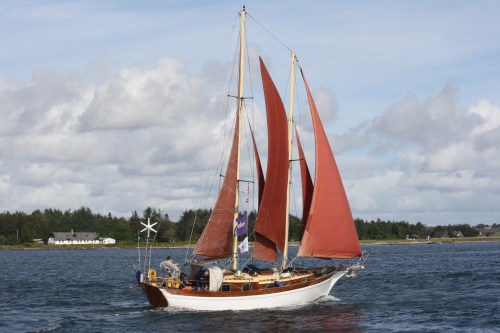 This site is mainly for those interested in Sailing in the far North of Europe including North of the Arctic Circle, in this case from Denmark through Sweden and the Baltic to Finland and Russia, and then through the lakes of Karelia and the Belamorsk Canal to Arkhangelsk in N Russia, and back to N Norway (Kirkenes), around North Cape, and down the long west coast of Norway before returning to the Limfjord in Jutland, Denmark.  This long voyage has been a post-retirement dream of mine, originally stimulated by my good friend Lars Klok at Vaeftet (Boatyard) in Skive, Denmark, and a chance meeting with Dutch sailor, Anton Bodewas, who has done the voyage twice in his Nicholson 28′ and who has been very helpful in giving advice. Since then, I have been further inspired by meeting the Cruising Association HLR for St Petersburg, Vladimir Ivankov as well as Hans Jørgen Sommerfelt of ‘Brizo’ who sailed around Norway and through Russia in 2012 and 2013, overwintering in Tromso en route. There is information on the route, the boat, the skipper and crew, some previous voyages in Aldarion, the recipes cooked on board, links to other relevant sites. In 2014 we will try to update the site during the voyage. There is a guest page for comments!

We hope to help to inspire others to explore this still rather unexplored sailing area, which often has surprisingly good summers!

The picture is of Aldarion competing in the ‘Limfjord Rundt’ races for wooden sailing boats, in September 2012. Thanks to Kristian Ebdrup, then crewing on ‘Loa’.