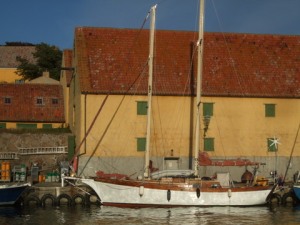 This site is about an adventure being planned for 2014. Principally, the aim is to explore the lakes and waterways of Russia before sailing around the North Cape of Norway and home to Denmark. The sail is just short of 4,000 nautical miles and will take from late May until early September, essentially – or at least hopefully – the Northern Summer. Much of it will be north of the Arctic Circle, and so benefit from the midnight sun. We are hoping for westerly or southerly winds to help us from Denmark to Russia, Arctic easterlies to take us from the White Sea through the Barents Sea to North Cape, and summer Northerlies to take us at least part of the way down the Norwegian coast.

There are hardly any Marinas in Russia, and very few places to fill fresh water or diesel from a pump or tap. Most of the harbours are not especially yacht-friendly. So we will need to be very self-sufficient for the month or so that we are in Russia.

Join us for the planning, and give us any advice that you can, even if only from an armchair!

Aldarion is a wooden Bermudan  Staysail Schooner 38’x 32’wl x12’3″x 5’6″ + bowsprit. Designed by the late Brian Lello and built in Cape Town, South Africa for the first owner Barry Dickensen, who specified a very strong blue water cruising yacht. She was finished in 1990. barry sailed her from South Africa to Brazil and North America, and then to Europe. He crossed the Atlantic several times, and also sailed in the UK and Mediterranean, covering some 12,000nm. She was purchased by John Bryden in 2003, and sailed from England to Scotland via ireland, extensively in Scotland including the Orkney Islands and the Outer Hebrides before crossing to Norway, where she sailed to the Lofoten Islands and back to Denmark. She has sailed in Sweden and Denmark, in all covering some 5,000nm so far. In September 2012, she competed in the series of races that were part of the 25th anniversary ‘Limfjord Rundt’ in Jutland.

In 2014, we plan to sail from Skive in Denmark to St Petersburg via the Baltic, and then through the lakes and Belamork canal to the White Sea, the Solovetsky Islands, and Arkangelsk, before returning to Denmark via Kirkenes, the North Cape of Norway and the Norwegian west coast. This is approximately 3,800 nm and we plan to leave Skive  around 23 May and arrive back in Skive in early September.

This blog is mainly for friends, family, crew, and other people interested in undertaking this or a similar voyage. In it we will try to go through the process of planning as well as including photos and other materials as we go along.